In Leadership Discipline – Emotional Intelligence I promised to provide you with four of the eight traits of transforming companies that Todd Klein “Built to Change” author presented. 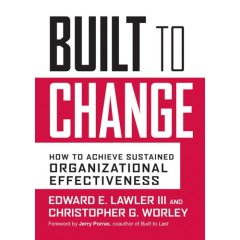 Instead here’s one of the four – Detachment.  Detachment is characterized as:  Companies that embrace the value of periodically doing absolutely nothing are more transformative than their constantly action oriented counterparts.   It’s what we call proactively inactive:  these companies stop, measure, plan, and retool with greater frequency, regularity and purpose.

Attending the Growth Summit is just one way we practice and recommend to our clients to “detach.”  At each Growth Summit I collect 3-4 pages of accountabilities (To Do Lists) based on the ideas I get, and as I pointed out receive nearly 50 impact ideas on which I can write and deliver to my clients.

Plan now to attend the Growth Summit in Atlanta, May 15-16 if for no other reason than to force yourself to detach.

Another good reason will be because Jim Collins is scheduled to speak for four hours.    Todd Klein recounted Bill Gates consistent practice of “think week” a best practice we encourage our clients to ritualize.  This story is also offered in Collins’ new book “Great by Choice.”   In 1984 Bill Gates’ think week provided a major transformation at Microsoft.  Gates recognized the changes and challenges that were threatening Microsoft as the Internet impacted everything Microsoft did.  He could foresee the impact and possibilities that would make Microsoft irrelevant in a matter of months.  The memo he wrote as a result of digesting this in his “think week” is legendary.  Entitled “Internet Tidal Wave” it inspired the development of Internet Explorer and many other transforming ideas that moved Microsoft into a position of leadership as the world embraced the Internet.

You absolutely need to recognize the critical importance of detachment.  Peter Drucker was one of the great Thought Leaders of the 20th century, on par with great Thought Leaders in our generation like Stephen Covey, Tom Peters and Jim Collins. Peter Drucker had a question he asked leaders: “Are you spending most of your time working in the business or on the business?” Think about what Drucker asks here – the question within the question: “Are you taking time out to think about how you strategically grow your business OR are you too busy working in day to day operations to do so and thus getting distracted from one of the most critical leaders roles: proactively planning our companies’ successful future?

Todd Klein’s question to our audience echoed this intention:  When are you going to schedule an offsite in the next 90 days?

You’re the founder, president, chief executive officer (CEO), and chairman of the board of one of the largest corporations in the world.  Once a year you spend a week at the tactical level of your business to participate in the practice I just described – Detachment.  Discover who and how this company got an idea in the packaging room that revolutionized his business and industry.  It’s a lesson in the value of detachment next blog.