Discipline - Do the Thing You Don’t Want to Do – Hardy Houston Growth Summit Cont.

Have you answered the following questions yet?

Last blog we learned from Darren Hardy publisher of Success Magazine that success is not what you do. 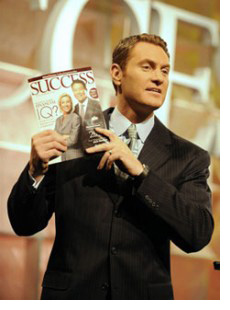 The great challenge is saying no.  What’s the problem?  Distractions!  Each year there are over 500,000 books published.  If you take the cumulative total of content produced from the beginning of time until 2003, today we receive that same volume every 48 hours!

We’ve become addicted to distraction.  It’s become a form of relief.  We find it to be a justifiable excuse.  We feel like we’re working, while we’re active we’re just not achieving.

Hardy pointed to focusing on the vital few functions as key to success.  As a realtor he realized very early that the three most important functions he could focus on were pitching a listing, negotiating a contract or prospecting.  When he started he used a stop watch to time himself doing these activities.  The first day he started he worked twelve hours and then looked at his stop watch to see how much time he’d spent doing any of these three.  It came to just 20 minutes.  Recognize that he only timed the duration when he was actually speaking to a prospect, pitching a listing, or negotiating.  After practicing and getting more disciplined [90 days] at his peak he was able to get four hours of time dedicated to these and in just 2-3 months was the top realtor in his company.

In an interview with Donald Trump, Trump offered this advice, “When in doubt, just do the thing you don’t want to do.”  He offered a story to illustrate this.  Trump was at one point about $1 billion in the hole.  He’d been asked to speak at a banquet for bankers.  He didn’t want to go.  He was embarrassed and was not looking forward to it.  Instead of backing out he went.  Sitting at the table next to him was the banker from all the banks that he owed money to.  This banker was not only very upset with the banks Trump owed but also very upset with Trump.  They struck up a conversation, and through the course of the evening got to know each other.  The next day they met at the banker's office and in a matter of about one hour resolved the bank loans which allowed Trump to continue and eventually turn his situation around.  That would not have happened if Trump had avoided doing the thing he didn’t want to do.

Want to be more successful?  Chose your vital functions and spend your time doing these.  We become what we practice most and we are always practicing something.

Hardy ended his presentation with three strategies of super achievers and an idea he called bookending your day.  We’ll discuss those in our next blogs.