Graham Weston took a risk asking our Growth Summit audience to give him comments good or bad about his company Rackspace.

At the core of his curiosity is a commitment to a cultural change he began in 1999 which has sky-rocketed his firm to enormous growth and an envied position in a highly competitive expanding marketplace.  A CEO from the audience responded describing an emergency situation where their server went down right before hosting an on line webinar at 10 PM on a Saturday.  Rackspace answered their call immediately and worked through the night to help them get their webinar on by 6 AM Sunday.  The CEO said it was the most impressive customer service performance he’d ever seen.

The secret to beating the Goliath you face in your market Weston believes is culture.  The key he feels is getting your people to want your company to succeed.  That requires a culture that your people believe in.

Rackspace’s story of moving from a company of customer service denial to fanatical customer support is described in detail in the pages of Switch, one of my favorite business books. 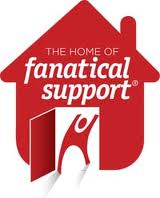 CEO Graham Weston knows a great deal about developing a winning culture.   After creating the web hosting business in 1998 on a platform of no service, and while still growing at 10% a month despite an avalanche of customer complaints, in fall of 1999 Weston decided to turn the company 180 degrees.

The decision didn’t come without its challenges. Many of the employees [50 at that time] were tech people who were quite comfortable operating in an environment that didn’t require any customer contact.  In fact Rackspace even hedged their bet, launching another company to compete with themselves, just to make sure they weren’t wrong about their direction.  In 1999 Fanatical Customer Support became Rackspace’s rallying cry.  It’s been their signature since. Weston believes customer service is the new edge in technology. Rackspace plans to continue to emphasize it as they pursue leadership in cloud computing.

Weston described instances where their focus has been challenged and how they achieved their success.  A bizarre car accident knocked out a transformer that provided power to 40,000 servers they provided to customers.  Despite generators that could pick up the slack, the fire department demanded they shut down, leaving customers without service for 45 minutes.  It was a very distressing time since Rackspace lead brand promise is to have customers never down for more than an hour.  [Internally it’s five minutes!]

Culture means becoming a talent magnet, making sure talent and culture fit really matter.  Each new employee is trained for 1 week just on the company culture.  It requires a huge commitment from their leadership team.  Graham spends two hours himself coaching new employees on strengths, something he learned and strongly believes in from Gallup’s Strength Based Leadership book.  People succeed at what they are good at.  It makes them feel better.  Employees are recognized as being okay as they are and to minimize their weaknesses. The goal is for each “Racker” to do what they do best every day.

They celebrate Heroes, providing the straight jacket award as the highest recognition an employee can earn.  The award is chosen by their peers.  Leadership conducts yearly engagement surveys on employees, and managers are held accountable if they have more than one declining score.

Fred Reichheld, The Ultimate Question Author is on Rackspace board.  Rackspace recognizes that by achieving a high net promoter score they turn their customers into sales people and their cost of sales goes down.

The company strongly believes in open book financials, providing their employees during the dot.com crash metrics on how they were doing and how close they were to trouble. All these moves were before the company went public.

Weston acknowledged that in their competitive space they’ve been fortunate to have 3 telephone companies, ATT&T, Verizon and Savis as their nearest competitors.  It’s helped he believes since most customers are not happy with their cell phone provider.  One of their competitors has written a book, The Best Service is No Service.  As a contrast to this book is Weston’s contention that answering the call quickly is one way you show the customer how much you value them.  Still new competition is emerging as their fourth ranked competitor emerges in Amazon.  It reminds Weston of the continued importance of their mantra, Fanatical Customer Service.

Rackspace is well acquainted with success. Weston recalls attending his first Growth Summit in 2004 when their company had about 350 employees.  Rackspace now employs over 3500.  Market cap for his business is estimated at $5.87 Billion.  It’s strong support for being fanatical about customer service.

The bottom line for Weston is culture.  David Bryce, Rackspace VP of Fanatical Support noted in 1999, “We must create a workspace culture where our people want to volunteer to do their best every day.”   Yes that’s right volunteer.  Weston observed that you can’t expect money to manage the company for you.  The things you can buy with money provide no advantage.  Ultimately you manage at the human level.  This determines your success.  That requires developing a culture where people want your business to succeed.