Most inspiring was hearing John F. Kennedy’s speech to Rice University students on September 12, 1962.  It’s a classic example of giving our nation, a BHAG [Big Hairy Audacious Goal], as he promised these students and faculty that before the decade was over the USA would put a man on the moon.  This of course is before BHAG was coined by Jim Collins in Built to Last.  Few realize that at the time of Kennedy’s announcement America was trailing the USSR in the space race.  The USSR beat the US into space by launching Sputnik in October of 1957.  The US followed that with public humiliation when a planned launch of its first satellite exploded on the launch pad in front of a live television audience.  Subsequently the USSR beat the US by putting a chimpanzee into space and then an astronaut, Yuri Gagarin [April 1961].  Gagarin actually orbited the earth before the US could even put a single man into space for only a short suborbital flight [Alan Shepard May 1961].

Kennedy’s speech and plans inspired a country.  “We choose to go to the moon in this decade and do the other things, not because they are easy, but because they are hard, because that goal will serve to organize and measure the best of our energies and skills, because that challenge is one that we are willing to accept, one we are unwilling to postpone, and one which we intend to win, and the others, too.  It is for these reasons that I regard the decision last year to shift our efforts in space from low to high gear as among the most important decisions that will be made during my incumbency in the office of the Presidency.” 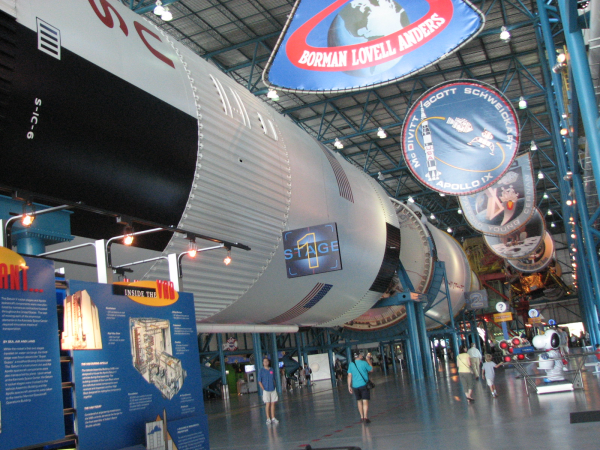 It reminded me of the importance of leadership’s role in providing vision, courage and of course confidence.  Standing at the Kennedy Space Complex looking up at the massive 363-foot long Saturn V moon rocket gives real insight into the measure of the accomplishment and the dream that Kennedy inspired.

John Kennedy’s BHAG was just short of a ten year goal for the US.  It certainly met the other criteria in Jim Collins’ Big Hairy Audacious Goal rules including being measureable and audacious not braggadacious.  You can read more on Collins’ rules at Building Companies to Last.