The Discipline of Clarity

It may be natural that two of my favorite stories from Good to Great and Great by Choice are two level five leaders who survived cancer, since overcoming Leukemia and going through a Bone Marrow Transplant have been a defining moment in my life.  Much of my esteem for Intel’s Andy Grove is written in Great by Choice 10Xer’s Empirical Creativity – Andy Grove Intel.  The blog outlines Grove’s approach to his discovery of prostate cancer.  Instead of relying on others people for cues on how to proceed, Grove looked for empirical evidence/creativity.  Empirical Evidence is one of the three Core Behaviors Collins found Great By Choice 10xers had in common.

These behaviors help balance the continuous uncertainty they face, that they cannot control, cannot accurately predict, which are coupled with the significant aspects of the world around them, versus rejecting the idea that these forces outside their control or chance events determine their results; they accept full responsibility for their own fate.

10xers feel calm because they have increased understanding of what it takes to survive, navigate, and prevail. They are much better prepared for what we cannot possibly predict

As I noted in the blog, “By “empirical” evidence we mean relying upon direct observation, conducting practical experiments, and/or engaging directly with evidence rather than relying upon opinion, whim, conventional wisdom, authority or untested ideas.  Empirical evidence enables 10Xers to make bold, creative moves and bound their risk.  Andy Grove’s approach to his cancer treatment was unusual, even creative, yet deeply grounded in evidence and rigor.”

If you’re wondering who Grove is and his importance to Intel, Grove is responsible from moving Intel from primarily manufacturing dynamic memory chips to focus on microprocessors.  He did this through another empirical creativity question when he and Gordon Moore were deciding what to do with their declining memory chips business due to Japanese expansion and competitive pricing.  Grove posed a hypothetical question to Moore, “If we were replaced and new management came in, what would they do?”

Moore responded, “Get out of DRAMS (Dynamic random-access memory).”

Grove’s reaction, “So, let’s go through the revolving door, come back in, shut down the memory business, and just do it ourselves.”

That move, Jim Collins notes in Great By Choice, coupled with sticking to its original SMaC recipe lead to Intel become a 10X winner.  It’s a classic example of providing clarity for your business and why this action is included as “How Intel Got Consumers to Love Chips in The Greatest Business Decisions of All Time by Verne Harnish and Editors of Fortune.

Darwin Smith made a similar bold move for Kimberly-Clark shortly after taking over as CEO for a company whose stock had fallen 36% behind the general market over the previous 20 years. 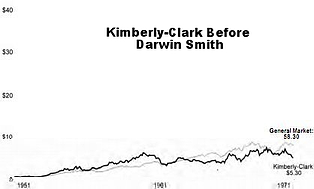 Kimberly-Clarks’ in house attorney before accepting the position, he wasn’t quite sure the board had made the correct move in hiring him.  A director pulled him aside to reinforce that opinion.  Yet in the next twenty years Smith transformed Kimberly-Clark into the leading paper-based consumer products company in the world.  Stock returns 4.1 times the general market, not only outperforming his rivals, Scott Paper and Proctor & Gamble, but also Coca-Cola, Hewlett-Packard, 3M and GE.

Few people know of Smith’s success mostly because he was a humble man.  His favorite companionship was with plumbers and electricians, spending his vacation around his Wisconsin farm in the cab of his backhoe, digging holes and removing rocks.

Just two months after Smith became CEO Doctors diagnosed him with nose and throat cancer. The prediction was less than a year to live.  He informed the board, but made it clear he was not dead yet, and had no plans to die anytime soon.  He had a demanding work schedule which he maintained while commuting weekly from Wisconsin to Houston for radiation treatment.  Smith managed to live 25 years after the diagnosis, near 20 of those as CEO.

Smith’s biggest decision for Kimberly-Clark: Sell the Mills! After becoming CEO Smith and his leadership team concluded that Kimberly-Clark’s traditional core business, coated paper, is doomed to mediocrity.   They reasoned that if Kimberly-Clark would thrust themselves into the consumer paper products industry, world-class competitors like Procter & Gamble would force it to achieve greatness.

A board member called Smith’s decision to sell the mills, the gutsiest move he’d ever seen a CEO make.  It’s regarded as a “burn the boats strategy” legendary Spanish Conquistador, Hernan Cortes, accomplished in 1519 when he landed in Mexico with 600 Spaniards, 16 horses and 11 boats intent on conquering the Yucatan Peninsula.

Smith even sold the mill in Kimberly, Wisconsin, heaving all the proceeds into the consumer business by investing in brands like Huggies and Kleenex. 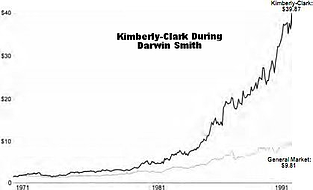 Few CEO’s, presidents or leaders provide this clarity of purpose for their businesses.  Yet in hindsight this burn the boats strategy provided no obscurity or ambiguity in what the most important outcome to expect.

It begs the question as you consider your strategy and rallying cry for 2015.  Have you made the One Thing for your business so clear, so precise, and simplistic that everyone in your company is aware what it is?  Is each department and leadership team focused on an overwhelming clarity of purpose for what 2015 should bring?  In may not be possible for you to have as bold, daring and ambitious focus for 2015 as Andy Grove and Darwin Smith had, but it’s just as important that whatever your plan is, it needs to be communicated and acted upon by everyone one of your people in order to achieve success.

What’s your focus for 2015?  Do you have a clear focus for the year and have one established for the first quarter or trimester?

If you do not already have your One Thing established for the 1st quarter or trimester you are late! The chances of catching up, being a week late already, are hardly bright, unless you’ve established an objective that doesn’t require your team to push past their normal comfort zones.

Clarity is important, communicating it to your team is essential.  Need help on how to create, clarify and communicate alignment in your company?   Positioning Systems Strategic Discipline principals will get your team aligned and focused, generating greater results in just 90 days guaranteed.  If you don’t have this type of discipline in your company, isn’t it time you did?  Don’t let another year pass you by with underachievement.