Daily Huddle – Where Are You Stuck

Last Monday when I arrived at my customers business in Concord, CA I was able to observe  their daily huddle.  It was about ten minutes in length and included about 12 people.  They went through the first two agenda items, priorities and metrics, but left out the “where are you stuck” portion of the meeting. 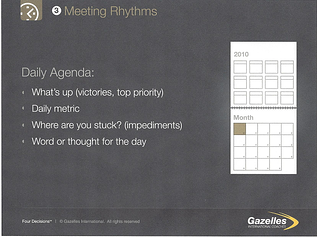 It was precise and punctuated with meaningful metrics and priorities from each individual including two who reported from the phone: one who works remotely, another who was stuck in traffic.

When we later reviewed meeting rhythms on the second day of our Annual Strategy and Planning Session I asked them why they didn’t include “Where are you stuck?”   One of the team members said in their culture they all know that if they’re ever stuck they should immediately approach someone in the office who can help them.  He said our people tend to not get stuck due to our culture and the way people get along and help each other knock down barriers and solve problems.

The first thing about this is that there’s no hard and fast rule in our Rockefeller Habits approach that says you absolutely have to do this step.  If it’s working for you without it and that’s the way you feel about your culture, great.  Continue unless and until it’s not working.

I did point out to them several elements they may want to consider for putting “Where are you stuck?” back in their daily huddle.

First if everyone interrupts others as a rule, it frequently harms performance rather than enhances it.  I often remind customers of the research from The Power of Full Engagement.  Authors Jim Loehr and Tony Schwartz note it typically takes 23 minutes for someone to get up to speed and really get into any project or task they are working on.  The challenge is most of us are interrupted every seven minutes.  What does that suggest?  It’s no wonder we can get so little accomplished.  The truth is the culprit isn’t always someone else.  We self-sabotage ourselves, looking at emails, getting up for a cup of coffee, bathroom back, and yes phone calls and your best friend or colleague at work asking you a question.

Anything we can do to prevent interruptions is a plus in my mind, so setting a time to discuss “stucks” in the daily huddle can provide that opportunity.  Again the Daily Huddle isn’t meant to solve those “Where are you stuck?” issues.  It’s meant to uncover who is having bottlenecks and perhaps someone who has a solution can suggest discussing the issue after the huddle or setting an appointment to help them.

Where are you stuck is also a good “red flag” mechanism.  How many people do you know that don’t get stuck on occasion, or even frequently?  The reality is, if you’re not getting stuck occasionally, you’re probably not getting much done either.  People who don’t work too hard or get involved in challenging projects may be coasting and failing to pull their weight.  Discovering who is not stuck could be more revealing than who is.

The “Red Flag” idea merits some discussion.  When I first started as a General Manager in radio I recall someone recommending I read Joe Sugarman’s book Success Forces.  It contained six rules to follow to help you manage and lead better.

One of these rules is Clean Your Desk.

You may know the practices in the US Army for Initial Entry Training.  It’s common for the Sargent in boot camp to inform his group of recruits that they need to make sure of one specific area of their barracks more than any other.  It could be the floors, the bathrooms, the beds or possibly their shoes.  For example he may require them to clean the floors so well that anyone could eat off them.  Or the beds need to be so tight he can bounce a quarter off them.

What you may not know is why they do this.  Sugarman explained that the practice goes back to what gets inspected, gets respected. If the barracks knows a specific area is going to be inspected, and it doesn’t meet the standard expected, that signals the Sergeant that there are much more serious issues to inspect as well.  If you know you’re going to be inspected for this, and you fail to get it done right, then surely there are many other mistakes as well.

At the radio stations I managed in Wausau, Wisconsin my rule was at the end of each day you need to have your desk clean with the exception of three things, one of which included your phone.  If you had a computer you had another exemption.  (Just a note to let you know we did allow employees to put things on their chairs' and slide them under the desk.) Everyone knew this rule.

Consistently I was the first person in the building most mornings.  When I discovered a desk in violation of this rule I’d wait until the person appeared that day and then approach them.  My first question always had nothing to do with their desk; rather I’d always ask how they were doing.   In many if not most cases the person would begin to fill me in possibly on their previous day, details of health or family issues, or something else that had impacted them from the previous day or possibly even before then.  I would listen, question, and learn as much as I could empathetically to understand their dilemma.  If I could help or direct them to someone that could I would.  Then and only then did I remind them that they’re desk wasn’t clean last night and would they please endeavor to follow this simple rule.

In most cases they never realized that the reason I’d approached them in the first place was because of their desk.  They were happy to disclose their issues and emotions to someone who was willing to listen.   I found out what was going on in their lives and hopefully helped them to make progress.

The rule wasn’t so much to make sure everyone started with a clean slate, by far the greatest value was to be immediately aware of which of my team was struggling and having issues beyond even what work they were involved in.  It greatly enhanced my communication with my staff and helped keep me informed as to how they were doing.

This Red Flag helped me to always manage and lead better.  It made my staff feel I was concerned and involved in their lives.

This annual meeting also revealed a great insight gleaned from Jim Collins Good to Great.  I’ll share that idea with you and how it can benefit your business next blog.

Topics: meeting rhythms, Execution, daily huddle, where are you stuck