May 1996, Paul O’Neil, (discussed in One Thing: Are Meeting Rhythms Keystone Habits?) had been at Alcoa for a decade. 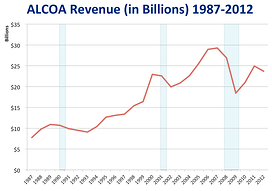 His leadership is studied at Harvard Business School and Kennedy School of Government, he’s mentioned as a candidate for commerce secretary or secretary of defense, the employees and union give him high marks.  Alcoa’s stock price has risen over 200%.  He’s an acknowledged success.

Once again at a shareholders meeting in Pittsburgh he stands trial.  A Benedictine nun stands up during the Q&A session accusing O’Neill of lying! The sister represents a social advocacy group concerned about wages and conditions inside an Alcoa plant in Ciudad Acuna, Mexico. While O’Neill commends Alcoa’s safety record she reports that workers in Mexico are becoming sick due to dangerous fumes.

O’Neill declares, “It’s untrue,” From his laptop he pulls the safety records from the Mexican plant, shares them with the audience, “See?”  The scores are high on safety, environmental compliance, and employee satisfaction surveys. 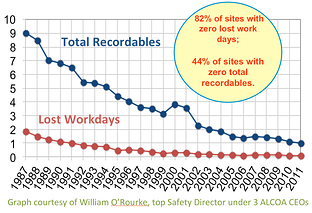 Robert Barton, who’s in charge of the facility, is one of Alcoa’s most senior managers. He is responsible for some of Alcoa’s largest partnerships.

Sister Mary Margaret sits down, but not before instructing the audience not to trust O’Neill.

O’Neill asks her to come to his office after the meeting.  The religious order Sister Mary Margaret belongs to owns 50 shares of Alcoa.  They’ve been asking for a shareholder vote for months to review the company’s Mexican operations.

O’Neill asks Sister Mary, “Have you been to any of the plants?”

She replies that she hasn’t.

O’Neil decides to be safe.  He instructs the head of HR and general counsel to fly to Mexico to determine what’s going on.

The executives poke through the Acuna plant’s records and discover reports of an incident never sent to headquarters.  Several months earlier a buildup of fumes occurred inside the building.  While a minor event, Barton, the plant’s exec, installed ventilators to remove the gases.  Those who had become ill due to the accident fully recovered within a day or two.

Back in Pittsburgh when these executives present their findings, O’Neill asked, “Did Bob Barton know that people had gotten sick?”

The executives noted, “We didn’t meet with him, but yeah it’s pretty clear he knew.”

His departure is a blow to important joint ventures.  Outsiders are shocked.  Barton’s been mentioned in articles as one of the company’s most valuable executives.

Within Alcoa, no one is surprised.

The culture O’Neill built on safety demands this response.

“Barton fired himself,” one of his colleagues told The Power of Habit: Why We Do What We Do in Life and Business author Charles Duhigg. “There wasn’t even a choice there.”

Keystone habits encourage widespread change: by creating cultures where new values become ingrained. The book explains: Keystone habits make tough choices—such as firing a top executive—easier, because when that person violates the culture, it’s clear they have to go. Sometimes these cultures manifest themselves in special vocabularies, the use of which becomes, itself, a habit that defines an organization. At Alcoa, for instance, there were “Core Programs” and “Safety Philosophies,” phrases that acted like suitcases, containing whole conversations about priorities, goals, and ways of thinking.

It can be argued then that Core Values are your companies Keystone Habits.  That is if you believe in the rules Positioning Systems and Gazelles/Rockefeller Habits coaches teach regarding Core Values.

We believe in order for a Core Value to stand, it must withstand some important criteria and tests. The best is time and adversity. There are 3 simple tests for a Core Value:

#1 – Would you fire a team member who consistently or blatantly violated one of your Core Values?

#2 – Would your company be willing to take a financial hit (lose money) in order to maintain the integrity of a Core Value?

#3 – Is this Core Value alive among your team today (can you identify the name of a team member that is living out each of your Core Value in an energetic and obvious manner?)

Reading through this set of tests verifies Alcoa CEO Paul O’Neill belief.  Failing to follow the rules for safety is intolerable.

O’Neill was willing to accept all three of these consequences in order to maintain the safety foundation built at Alcoa.

O’Neill told author Charles Duhigg, “It might have been hard at another company to fire someone who had been there so long. it wasn’t hard for me. It was clear what our values dictated. He got fired because he didn’t report the incident, and so no one else had the opportunity to learn from it. Not sharing an opportunity to learn is a cardinal sin.”

Many companies have Core Values, but too often they’re not alive and fully functioning in the business.  At Positioning Systems we have an Advanced Strategy checklist on Core Values we ask our customers to grade their performance:  red, yellow, green and super green (the latter for vastly exceeding standards) to recognize how vibrant their Core Values are in their company.

Send me an email to with Core Values Advanced Strategy in the subject line and I’ll send you a worksheet to review your core values to determine how “alive” they are in your organization.

Keystone Habits like Core Values can impact your business in many ways.  As the safety emphasis swept through the company, efficiency and productivity increased company-wide.  We’ll look at this metamorphic dynamic further in an upcoming blog.

O’Neill’s keystone habit—worker safety—created a platform that encouraged another practice—email—years ahead of competitors. How does communication flow in your organization?  We’ll explore Alcoa’s advance email methods in our next blog.