Where Does Confidence Come From? Giving Positive Reinforcement

What happens to your brain, when it gets to think about something hard?

The answer not surprisingly is that it gets bigger, like a muscle.  Now before you get too concerned that by thinking about hard stuff your head is going to swell, just remember that thinking and the brain is more about synapses than muscle when they say it gets bigger!

But isn’t it good to know that when something challenges you that it’s actually making you able to use your brain better the next time?

You may have already experienced this when you’ve faced a similar challenge and found it easier to deal with.

Several research and articles give some surprising information about what we say and how people, particularly respond to it.   Positive Reinforcement – Focus Praise on Behaviors covered just one observation on this and recent landmark research by Carol Dweck provided more evidence on how we need to provide praise and recognition, and why it does or doesn’t work.  In fact some praise actually diminishes a person’s will to achieve.

One sports psychologist has noted confidence is an outcome.  Confidence comes from achievement! 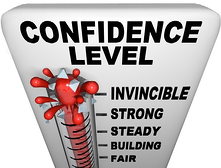 It’s another reason why Aubrey Daniels Bringing Out the Best In People is such a powerful read for learning how to manage, support and encourage people in the workplace.

Much of Carol Dweck’s landmark research in a New York Magazine article: How Not to Talk to Your Kids: The inverse power of praise  It includes the authors own observations from speaking to parents and her attempts to change her style of praise with her children.

Here are some of the ideas offered in the article for you to consider about how to raise the confidence of yourself and your people, and how to administer praise and recognition so that it achieves the outcome you’re looking for.

For a few decades, it’s been noted that a large percentage of all gifted students (those who score in the top 10 percent on aptitude tests) severely underestimate their own abilities. Those afflicted with this lack of perceived competence adopt lower standards for success and expect less of themselves. They underrate the importance of effort, and they overrate how much help they need from a parent.

Giving children the label of “smart” does not prevent them from under-performing. It might actually be causing it.

In the second round testing, one choice was a test that would be more difficult than the first, but the researchers told the kids that they’d learn a lot from attempting the puzzles. The other choice, Dweck’s team explained, was an easy test, just like the first. Of those praised for their effort, 90 percent chose the harder set of puzzles. Of those praised for their intelligence, a majority chose the easy test. The “smart” kids took the cop-out.

In a subsequent round the researchers artificially induced a round of failure; Dweck’s researchers then gave all the fifth-graders a final round of tests that were engineered to be as easy as the first round. Those who had been praised for their effort significantly improved on their first score—by about 30 percent. Those who’d been told they were smart did worse than they had at the very beginning—by about 20 percent.

Dweck had suspected that praise could backfire, but even she was surprised by the magnitude of the effect. “Emphasizing effort gives a child a variable that they can control,” she explains. “They come to see themselves as in control of their success. Emphasizing natural intelligence takes it out of the child’s control, and it provides no good recipe for responding to a failure.”

Here’s the conclusion:  In follow-up interviews, Carol Dweck discovered that those who think that innate intelligence is the key to success begin to discount the importance of effort. I am smart, the kids’ reasoning goes; I don’t need to put out effort. Expending effort becomes stigmatized—it’s public proof that you can’t cut it on your natural gifts.

In another test Dweck conducted a control group and a test group given two lessons. The only difference between the control group and the test group were two lessons, a total of 50 minutes spent teaching not math but a single idea: that the brain is a muscle. Giving it a harder workout makes you smarter. That alone improved their math scores.

The result: To be effective, researchers have found, praise needs to be specific.

Sincerity of praise is also crucial. Just as we can sniff out the true meaning of a backhanded compliment or a disingenuous apology, children, too, scrutinize praise for hidden agendas. Only young children—under the age of 7—take praise at face value: Older children are just as suspicious of it as adults.

Psychologist Wulf-Uwe Meyer, a pioneer in the field, conducted a series of studies where children watched other students receive praise. According to Meyer’s findings, by the age of 12, children believe that earning praise from a teacher is not a sign you did well—it’s actually a sign you lack ability and the teacher thinks you need extra encouragement. And teens, Meyer found, discounted praise to such an extent that they believed it’s a teacher’s criticism—not praise at all—that really conveys a positive belief in a student’s aptitude.

Scholars from Reed College and Stanford reviewed over 150 praise studies. Their meta-analysis determined that praised students become risk-averse and lack perceived autonomy  The scholars found consistent correlations between a liberal use of praise and students’ “shorter task persistence, more eye-checking with the teacher, and inflected speech such that answers have the intonation of questions.”

The article points out that the ability to repeatedly respond to failure by exerting more effort—instead of simply giving up—is a trait well studied in psychology. People with this trait, persistence, rebound well and can sustain their motivation through long periods of delayed gratification.  Persistence turns out to be more than a conscious act of will; it’s also an unconscious response, governed by a circuit in the brain. Dr. Robert Cloninger at Washington University in St. Louis located the circuit in a part of the brain called the orbital and medial prefrontal cortex.

“The key is intermittent reinforcement,” says Cloninger. The brain has to learn that frustrating spells can be worked through. “A person who grows up getting too frequent rewards will not have persistence, because they’ll quit when the rewards disappear.”

So here’s the question:  How are you giving praise?

What are you giving praise for?
Is it time you considered changing your methods to get more of the desired outcome?  Are you raising or diminishing confidence by the way you praise and offer positive reinforcement?

The good news from all this is the answer to the following question:  “What happens to your brain, again, when it gets to think about something hard?”

Hopefully you now know the answer, “It gets bigger, like a muscle,”