Givers and Takers – Who Succeeds and Fails More? 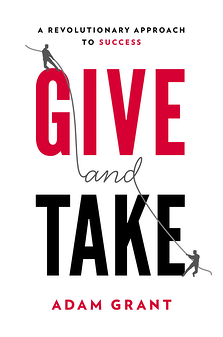 Give and Take by Adam Grant offers insight into three types of people:  givers, takers, and matchers.  The book describes characteristics of each type, yet cautions that while giving, taking, and matching are three fundamental styles of social interaction, the lines between them are not always hard and fast.  You can actually shift between one style of reciprocity style as you navigate across different work roles and relationships.  At work the vast majority of people develop a primary reciprocity style.  This is how you approach most of the people most of the time.  The research discovered your primary style can play as much a role in you success as hard work, talent and luck.  (That is if you believe in the latter!)

Here are some definitions of the three styles of reciprocity with italics where the author’s comments are used:

Takers: Chances are you know someone who is.  Takers like to get more than they give.  Do you need this description?  They tilt reciprocity in their own favor, putting their own interests ahead of others’ needs. Takers believe that the world is a competitive, dog-eat-dog place. To succeed they feel the need to be better than others. They self-promote and make sure they get plenty of credit for their efforts. Garden-variety takers aren’t cruel or cutthroat; they’re just cautious and self-protective. “If I don’t look out for myself first,” takers think, “no one will.”

Givers: Givers are a relatively rare breed in the workplace. They tilt reciprocity in the other direction, preferring to give more than they get. Takers tend to be self-focused, while givers are other-focused, paying more attention to what other people need from them. These preferences aren’t about money: givers and takers aren’t distinguished by how much they donate to charity or the compensation that they command from their employers. Givers and takers differ in their attitudes and actions toward other people. If you’re a taker, you help others strategically, when the benefits to you outweigh the personal costs. If you’re a giver, you use a different cost-benefit analysis: you help whenever the benefits to others exceed the personal costs. You might not think about the personal costs at all.  You help others without expecting anything in return. If you’re a giver at work, you simply strive to be generous in sharing your time, energy, knowledge, skills, ideas, and connections with other people who can benefit from them.

Matchers: Professionally, few of us act purely like givers or takers, adopting a third style instead. Most become matchers, striving to preserve an equal balance of giving and getting. Matchers operate on the principle of fairness: when they help others, they protect themselves by seeking reciprocity. If you’re a matcher, you believe in tit for tat, and your relationships are governed by even exchanges of favors.

Giving, taking, and matching are three fundamental styles of social interaction, but the lines between them aren’t hard and fast. You might find that you shift from one reciprocity style to another as you travel across different work roles and relationships.* It wouldn’t be surprising if you act like a taker when negotiating your salary, a giver when mentoring someone with less experience than you, and a matcher when sharing expertise with a colleague. But evidence shows that at work, the vast majority of people develop a primary reciprocity style, which captures how they approach most of the people most of the time. As mentioned this primary style can play as much of a role in our success as hard work, talent, and luck.

The profile of a giver is one I’m well acquainted with.  During my journey through Acute Myeloid Leukemia I discovered there are a lot of givers out there.  Starting with the nurses and doctors to the many people who supported my family and I with a fund raiser, cards, money, meals, gift cards and prayers.  It was an outpouring of kindness that makes me emotional just to think about.

If you have doubts that a lot of people are givers, well I’m living proof by witnessing it first-hand.  The biggest giver on the planet is my wife Michelle!

So who succeeds most?

That answer may surprise you: Givers

That may seem confusing.  How can givers achieve success the greatest, and yet also fail the most?  There is a subtly here that is only partly answered by the fact that in the short run givers fail.  By following the giver profile, givers end up succeeding in the long run.  Chip Conley, the renowned entrepreneur who founded Joie de Vivre Hotels, explains, “Being a giver is not good for a 100-yard dash, but it’s valuable in a marathon.”

The book provides lots of examples of givers and takers.  It also offers ideas and suggestions on how to be a giver who succeeds.  Abraham Lincoln and Frank Lloyd Wright are two examples the book offers.  Who was a giver and who a taker? Unlike the question about who succeeds and fails the answer to whether Frank Lloyd Wright or Abraham Lincoln was a giver or taker has a definitive answer.  We’ll explore their profiles next blog.