Being On Time – Respect Time Management

Are you on time?  Do you run on Lombardi time?

The phrase Lombardi time is coined from Vince Lombardi, the legendary Green Bay Packers coach whose name is on the NFL Super Bowl trophy.  He required his team to be early. 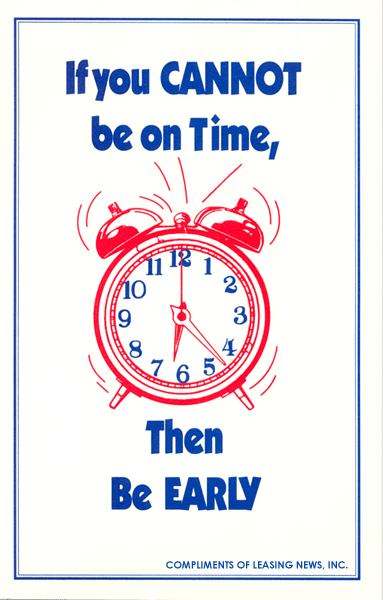 It meant that things would run crisply. Everyone would respect each other. No time would be lost waiting. Being on time is discipline in action.

Strategic Disciplines meeting rhythms require being on time.  Being on time builds confidence, respect, and collaboration.  Daily Huddles are expressly scheduled at an odd time.  7:59, 11:21, 9:17.  These times indicate the meeting will be short and precise.

Working with a new customer these past two weeks we discussed the importance of starting their daily huddles at an odd time and making sure each huddle was standing up, to convey the briefness of the meeting.  They plan to make meeting rhythms part of their metrics, measuring attendance and participation.  One of my customers measures whether or not people show up on time.

Being on time is a matter of respect.  My wife, Michelle, is a stickler for this.  I like to arrive early for my client meetings, however when it comes to church, theater, movies, concert performances and going to the airport I’m more of a just in time guy.  She’s always pushing me to start early for events like these.  As I write this I realize that being on time for events that she cares about is showing her respect.  I need to improve on this.

Do you know someone who is usually late?

In the The Power of Full Engagement – Jim Loehr & Tony Schwartz, provide an excellent example of a CEO who was constantly late.   They worked with him to help him understand how always being late was not consistent his values.  By constantly being late he was communicating that he didn’t value others.  Here’s the story from the book:

Barry F. was the CEO of a large information services company, and he thought of himself as a benevolent boss who treated his employees well. Nonetheless, one of the most consistent pieces of feedback he got from his direct reports was that he persistently kept them waiting and seemed not to value their time. This was a criticism, he acknowledged, that he had received for many years, and he couldn’t deny its truth. Unfortunately, he told us, there was nothing he could do about it. Barry’s daily schedule as CEO was packed. He never purposely kept anyone waiting, but calls and other demands piled up and he didn’t express much hope of changing his behavior.

That perception changed dramatically during our work on identifying the values that Barry held most dear. He was unequivocal in identifying the number one value in his life: respect for others. Both of his parents had modeled this behavior and he spoke about it with great conviction.

“How then,” we asked, “does respect for others square with keeping people waiting?”

There was a long silence. “It doesn’t,” he said finally.

When it came time to create Barry’s action plan, respecting people’s time became one of his primary commitments. When we spoke to Barry several months later, he told us that keeping on schedule had been difficult at first. He worried that he would antagonize the chairman of his company, members of his own board and key clients if he tried to end meetings with them at a specific time. What made it possible was reconnecting to the value he placed on respect for others. “The first thing I did was get more focused about covering my agenda in the time allotted,” he explained. “In cases where time begins to run out and we still aren’t finished, I now simply stop and explain that I am very sorry, but that I have made it a policy not to keep people waiting and that we’ll have to schedule more time later. What I found is that it seems to make even the people I am meeting with feel more respected. It also makes them much more efficient about getting through their agendas.” Simply acknowledging how important he felt it was to respect others gave Barry the determination to make a change that had eluded him for years.

Are you frequently late?  How does that coincide with your deepest values and respecting others?

Discipline builds confidence.  As a leader, if you are undisciplined about something as simple as being punctual, what message does that send to your team?  If your team is undisciplined, perhaps the fault lies with you.

If you can’t be on time how does that fit into your company’s discipline?

Are you a giver, taker or matcher?  It’s a question resolved in Give and Take by Adam Grant.  Are givers, takers, or matchers more likely to succeed? Which fails more?  That’s next blog.