The Five Habits of Outthinkers – Develop a Winning Habit

How do some people see and seize strategic options that others overlook?

If you’ve been following our blogs on Outthinker Strategies, you might be asking this question.

Our past several blogs share the 5 most commonly used strategies by Outthinkers to disrupt their competition to achieve success, according to Outthink the Competition: How a New Generation of Strategists Sees Options Others Ignore by Kaihan Krippendorff: 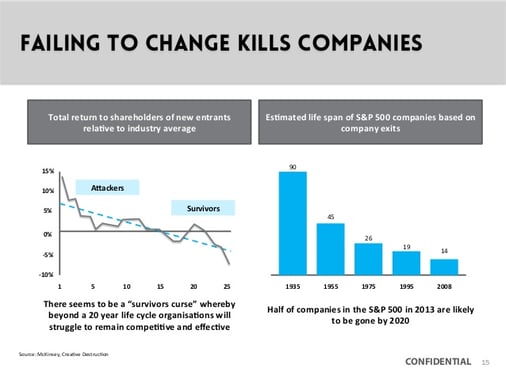 Before sharing the five habits of Outthinkers, it’s critical you and your business understand the need for your business to change.  The following two graphics should get your attention.  Your business, how you conduct it, what and how your competition does business, how your customers respond and act is changing. Drastically! More to the point: Disruptively! It’s not a question of whether it will or not. It’s simply a matter of time.  If you fail to change, your business will become the most recent fatality to the disruption occurring in today’s economy.

Digital Disruption, as this graphic shares, is coming to your business. 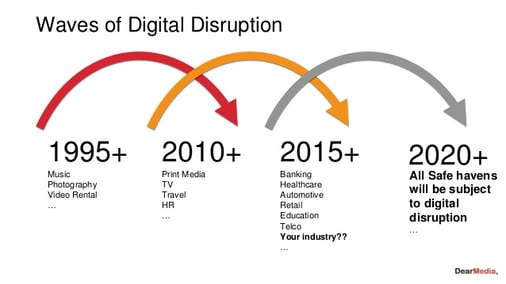 The Five Habits of Outthinkers

Positioning Systems Strategic Discipline is the fundamental practice of creating Winning Habits.  Krippendorff’s identifies these Outthinker characteristics as habits. Outthinking is another habit you can cultivate, learn and develop to help your business.

Krippendorff mashes all of his experiences, teaching, studying today’s and past great thinkers, contrasting these thought processes of Outthinkers with the rest of us, to identify five key habits leading Outthinkers see and realize to produce unorthodox solutions.  I’ve shorten the definitions in the book. Krippendorff invests a chapter in each habit. I urge you to get the book and read it to capture the critical nature of these ideas and habits: 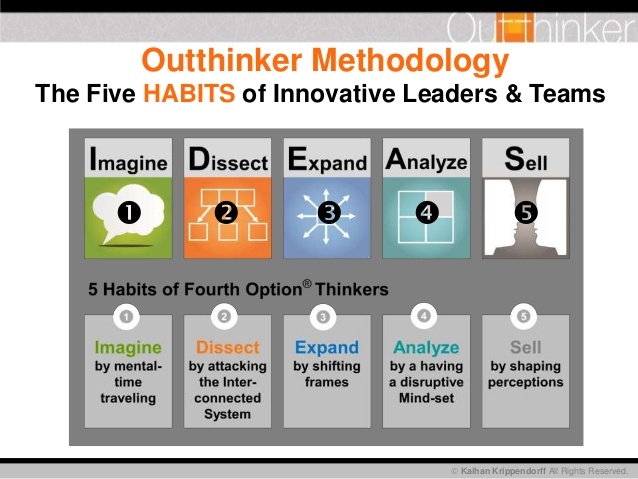 Every great achievement was a vision before it became a reality. ~Henry Kissinger

To help you think similarly Krippendorff shares the three planes you need to consider, which Chinese military strategist Sun Tzu advised generals to consider when planning for battle:

The ability to travel mentally forward in time is a key distinguisher between humans and animals. We all begin developing this ability around the age of three. Some of us continue developing this for many years, and a few of us become quite advanced. Outthinkers, I believe, have a heightened ability. As a result, they advance where others hold back, they see things as possible that others cannot fathom, and they are able to see “reasons something won't work” as simply “issues that remain to be resolved.”

His theory: all intelligent organizations, and even organisms, win by passing more efficiently through four stages of interactions with their environments:

I never came upon any of my discoveries through the process of rational thinking.  ~ Albert Einstein

Great strategists—Outthinkers—shift frames. They attack the problem with a greater number and diversity of viewpoints. This creates two advantages: First, they see more options than others see, which makes them more likely to find the silver bullet. Second, the resulting strategy, if it is rooted in a different frame, will be more disruptive because competitors will be slow to respond. They will resist shifting their frame, giving the Outthinkers a head start.

If everything eventually becomes a toaster, the job of the Outthinker is twofold. First, you must figure out how to slow down that process as much as possible. This means convincing the competition to hold off copying you, even if they can. The longer you can hold them off, the longer you have to be earning a higher profit margin. Second, you must always be moving so nimbly that your competitors can't copy you, even if they want to.

The final habit that Outthinkers exhibit is shaping perceptions. We often think the job ends when we have come up with the brilliant idea. What is left is to simply execute it. But before you even have something to execute, you must enroll key stakeholders—funders, employees, partners, and so on. This requires shifting their perspectives so that they see the attractiveness of your idea. The key difference between how Outthinkers take on this challenge and how less skilled influencers operate is that Outthinkers get into the minds of those they are seeking to influence. They shift their language—their metaphors, narratives, and frames—and pick precisely the right words. They understand that reality is relative, that very little of the reality we operate in is rooted in hard, tangible fact. They shape others' perceptions and in doing so shape their realities and change the world. 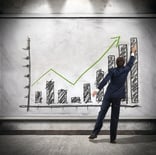 Get a head start on your 2018 planning by attending Scaling Up Business Growth Workshop in Cedar Rapids, IA. We’ll be sharing these ideas on Disruption and Outthink the Competition, plus our Scaling Up and Strategic Discipline principles.

Last week a friend asked me to get together.  Despite consistently scoring high on his performance matrix, he recently had his future freed up.  He asked me for insight on how to approach his next position, and what to do about his advancing age, since he was sure his potential employer would ask him. What he shared with me in our meeting, revealed the mistake businesses make when releasing good performers and keeping poor ones.