In preparing to achieve your one thing for 2016, you should be ready for obstacles, especially if you’ve set new high goals and priorities.   It would be wise to realize the higher the goal you set, the larger the rocks and boulders you will encounter.   It’s also important you recognize the inherent value in each obstruction you encounter.

You may have heard this story before. I recently read it in The Divine Connections, by Christopher W. Chenevert.

A man found a cocoon of an emperor moth. He took it home so that he could watch the moth come out of the cocoon. On the day a small opening appeared, he sat and watched the moth for several hours as the moth struggled to force the body through that little hole.

The moth seemed to be stuck and appeared to have stopped making progress. It seemed as if it had gotten as far as it could and it could go no farther. The man, in his kindness, decided to help the moth; so he took a pair of scissors and snipped off the remaining bit of the cocoon.

The moth then emerged easily. But its body was swollen and small, its wings wrinkled and shriveled. The man continued to watch the moth because he expected that, at any moment, the wings would enlarge and expand to and able to support the body, which would contract in time. Neither happened! In fact, the little moth spent the rest of its life crawling around with a small, swollen body and shriveled wings. It never was able to fly. The man in his kindness and haste did not understand that the struggle required for the moth to get through the tiny opening was necessary to force fluid from the body of the moth into its wings so that it would be ready for flight upon achieving its freedom from the cocoon. Freedom and flight would only come after the struggle. By depriving the moth of a struggle, he deprived the moth of health.

Struggles can be exactly what we need in our life. If we were to go through our life without any obstacles, we would be crippled. We would never be as strong as what we are capable of becoming. Give every opportunity a chance, leave no room for regrets, and don't forget the power in the struggle. 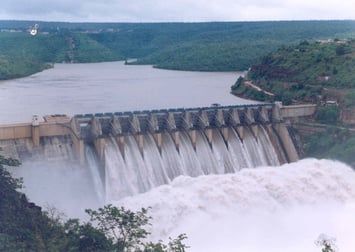 The picture is Srisailam Dam in India.  People view this picture marvel at the Power they see.  Actually, what they’re appreciating, is dissipated power. The Real Power is at the base of a dam.  This is where power is stored.

So too is it with us.  The great leaders exhibit exceptional power by remaining calm in the face of turbulent times.

When faced with challenges be like Winston Churchill.  Great Britain, the only world power willing to stand up to Germany, which at the time had conquered most of Europe and vital parts of North Africa, allied with the Soviet Union on September 1, 1949.  Together, they took Poland in a little over 30 days.  Despite the overwhelming odds against him, (remember the United States refused to enter the war until Pearl Harbor, over 2 years later), Churchill refused to give in.

We visited several excellent concepts from Christine Comaford’s book Smart Tribes in this blog.  Comaford recommends the idea of reframing when considering any challenge you face.  In Christine Comaford The Number One Neuroscience Game-Changing Tool All Leaders Need For The New Year, Comaford notes, “According to research from Stanford University, only a half hour of complaining every day physically damages a person’s brain. Neurons in the hippocampus (the part of the brain responsible for problem solving and meta-cognition) are injured when flooded with the chemical signature of the body’s response to negativity, whether you are the complainer or the recipient of the complaint.

And worse yet, complaining can be habitual. Once the complaining aspect of Critter State becomes acceptable we all just normalize around it. According to Guy Winch PhD, author of “The Squeaky Wheel”, venting also puts cortisol, the stress hormone, into our bloodstream.

That’s not to say, don’t notice problems. Too much rose-colored glasses can also become a liability. To know when to reframe and when to address with some targeted feedback, let’s take Pope John the XXIII’s timeless advice here: “See everything, overlook a great deal, correct a little.”

Where we’ve decided to “overlook” grooving your brain to reframe helps keep your brain healthy and everyone in the Smart State.”

As a final punctuation to this idea of reframing and how to meet the challenges you face in 2016, I’d like to offer one of my favorites from Brian Tracy’s Psychology of Achievement, another author we’ve referred to several times in this blog.

Tracy’s advice on overcoming obstacles toward your goals is: When you set a new goal for yourself very often because what you are presently doing is not conducive to the achievement of that goal, your life will be thrown into turmoil.  You will have what appear to be setbacks, great adversities will occur, great disappointments.  And in retrospect when you look back over your life, and look back on the bad things that happened, of the difficulties that occurred, you'll say, "boy it sure was lucky that occurred, or that thing happened, or this goo thing wouldn't have come about later.  A person will set an income goal and find two weeks later they're laid off and later get a new and better job within which they are capable of achieving that goal.  Or they'll be in a relationship and their goal is to have a happy harmonious relationship with the right person and the relationship that they're in will fall apart and later on they will meet the right person.  "Boy I'm sure glad that relationship didn't work out because if it hadn't I would never have met this person or found this situation."

So be prepared for adversity, struggle, turmoil when you begin to set high new positive goals for yourself.  Because of then the super conscious mind will put your through a series of experiences necessary to get you where you want to go.

If you set high goals for yourself you need preparation to reach them.  Very often there are a series of steps--- a series of payments you must go through in terms of adversity and struggle.  If you keep on keeping on, in retrospect you will understand that this was an important and intergal part of the ultimate achievement of your goals.

Prepare for obstacles and the rocks that you will invariably face as you set higher goals.

Next blog we’re going to continue our journey on the One Thing.  We’ve explored asking the right question, next blog we look at crafting the path to Great Answers.