Verne Harnish has long lauded Kip Tindell’s book Uncontainable as one of the best business books he’s ever read. Perhaps it was my frame of mind or his voice, but I must confess that when I began listening to the audio version of Uncontainable I was less than impressed.  Kip is the voice on the audio version and I simply found myself losing interest as he continued to preach his philosophy on The Container Store and how he influenced its growth.

So, when Verne interviewed Kip at the Dallas Growth Summit I expected to be unimpressed.

Despite my prejudice, Verne’s interview achieved just the opposite.  I’d suggest Kip’s insight is the most impactful of the Dallas Growth Summit.

Tindell shares a fervent belief in the concept of Conscious Capitalism.  We explored this in 3 Rules, 5 Attributes Make A Good Company Achieve Business Growth!  Companies like Costco, Whole Foods and Southwest Airlines, living this philosophy, influenced Tindell's building of The Container Store.

As Herbert "Herb" David Kelleher, co-founder, Chairman Emeritus and former CEO of Southwest Airlines stated, “A company is stronger if it is bound by love rather than by fear.”

A revealing question to ask about your company:  How Strong Is Communication in your Business?

Kip Tindell notes that we’re all unhappy when we feel excluded.  Communication is compassionate.  “Nothing,” he noted, “gets rid of bad actions faster than transparency!”

Real Transparency is communication and Tindell notes that this starts with leadership.

Tindell shared one of The Container Store’s fundamental principles, or Core Values, on people; the idea that one Great Person equals three average ones.  Who, he asks, wants to work at a mediocre company?  At The Container Store everyone works with great people.  He noted, if you were on a golf team wouldn’t you want to golf with Phil Mickelson?  When you were in school didn’t you want to be with the coolest kids, the girl/boy who was the most popular, etc.?  He feels his people want to come to work in the morning.  They achieve great things because they work with other people who are great.   Employees feel privileged to work at The Container Store because of the quality of the people they work with.

Build culture around his life philosophy

Part of Tindell’s values include never being accused of being a pushy sales person.  He believes in something he referred to in his book Uncontainable, 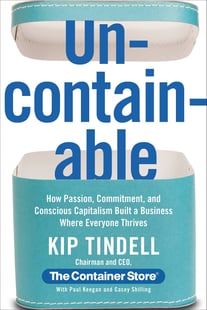 the “Man in the Desert Approach” to selling. If a man was in the dessert for an extended period of time and he came upon an oasis, what would he want?  He’d certainly want a glass of water to quench his parched lips and throat.  Yet he’d also want and need so much more.  How about some Gatorade to restore his electrolytes?  Wouldn’t he want to call home and have a meal?

His team at The Container Store is trained to carry it further.  When someone asks for a tie rack, they give the customer a dance, asking questions to learn more about their closet and their needs beyond what they feel is their solution.  The Container Store is there to “Sell solutions not items.” Ultimately, the customer buys more because they’ve solved their problems.

In order to achieve this, you must have great people, and ultimately, people who care.  For more on The Container Store Kip Tindell’s Core Values, specifically their “1 equals 3”, visit Core Value in Recruiting and Hiring.

Core Values are one of the Four Decisions within Strategy.  We’ll be specifically addressing Core Values, how to create them and discover if they are ALIVE in your business at our Scaling Up workshop this coming Wednesday.  Join us to learn about these resources and tools plus help you plan at our November 11th Scaling Up Workshop in Cedar Rapids, IA.  Learn specific action steps to scale your business for growth in 2016.

Who already owns your next customer?  Andrew Davis author of Brandscaping: Unleashing the Power of Partnerships, offered insight on how to grow your business through partnerships with other businesses.  We’ll explore his presentation and ideas in the next blog.