Determining the right strategy is the key to top line revenue growth.  Strategy 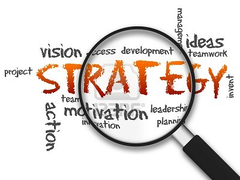 is one of the Four Decisions every growth company MUST get right to succeed.  Just a reminder these include People, Strategy, Execution and Cash.

On Friday I had the opportunity to work with one client planning their 2nd trimester. Exploring Great by Choice in the executive education portion of our meeting we wanted to determine if developing their SMaC recipe would be another step to expand and grow their strategy.  The exploration occurred due to a disappointing weather related first trimester. They displayed remarkable discipline to stay true to their strategy and tactics despite the market dynamics.  They’ve grown well above industry numbers for the past three years, and with this small blip they avoided some of the reaction that many distributors would make to discount and respond to the market in order to keep revenue numbers on target.  Instead their first trimester priority was an aggressive approach to cost containment and waste.  Despite year over year revenue declines they are on target to exceed profit projections for their first trimester.

We looked at Southwest Airlines, Intel and ConnectWise IT SMaC Recipe.  With the discipline this company displayed during the first trimester it appears they have a lot of the recipe in place, simply not documented.   To document would allow them to be assured they are remaining true to their recipe and give them additional confidence in their decision making.

That’s what this blog is about.  Decision Making.

Remember the paradox of execution versus strategy.  While execution is critical to achieving results, it will not be the reason your business will eventually fail.  You will fail most likely due to poor decision making.

Without proper execution, time to noodle, think, plan, study the market, its changes and dynamics will be at a minimum.  Strategy time is largely dependent on how well you’re executing.  They are interdependent.  If you don’t have time to prioritize and make good decisions it’s probably due to an inability to execute properly and proficiently.

Friday afternoon an opportunity to meet with a prospective client drilled the impact of strategy again.  A small international company with hopes of moving their operation to Thailand they were conflicted over what would allow them to make this move without having to give up their current business model and start over.  Were their opportunities with their business they hadn’t explored?  The heritage of their type of business is usually family-oriented.  Is that a condition for success or are they trapped in only having seen the business succeed in that environment?

Strategy will play a critical role in their decision whether to move ahead with my coaching as well in the growth and success of their company.

Decision-Making.   You absolutely must make time for it.  In order to do that you need to get your head above the whirlwind.  It requires Strategic Discipline approach.  Determine your priorities (Make sure to have ONE THING), measure your success against these priorities, and then put in place meeting rhythms to provide a cadence of accountability.

In my previous blog I indicated the Heath Brothers authored a new book, Decision Making: Decisive: How to Make Better Choices in Life and Work.  I'll explore some of their views next blog.

First from one of my clients who attained officer status in the military, “Any Decision in better than No-Decision.”  It’s an axiom for military conduct.   Overwhelming evidence in military combat has been collected to support this.

Do you agree?  If so make sure you remember this when you are being challenged by a decision.

Finally a lesson on decision making I learned from a dear friend when I was emotionally struggling with my divorce many years ago.  The guilt of abandoning my 2 year old son was overwhelming.  For months I couldn’t get past the emotional feeling of deserting him by not being a live-in father.  An article helped me make my decision.  Few decisions are completely black and white.  If they are we wouldn’t struggle with them so much.  The key to making good decisions is not the decision itself; rather it’s what we do after we make the decision.  The actions after our decision determine whether or not our judgment is sound.

I’d love to hear your comments on both of these decision-making keys.

Next blog a look at four points the Heath Brothers provide for making better decisions.