Do your meetings lack conflict?  If so, isn’t that good?

Actually there’s reason to believe that when your meetings fail to have conflict it’s actually a bad sign.   Possibly a very bad sign.

Patrick Lencioni Five Dysfunctions of a Team and Death by Meeting suggests that lacking conflicts in your meetings means there’s usually not much getting accomplished.  There’s a lack of interest and commitment that generally means your business is void of passion.

Underlying this is possibly a serious lack of trust among your executive team.  They’re afraid to be vulnerable and share how they feel for fear of exposing their weaknesses, lack of confidence or being ganged up on if they are wrong.  What kind of organization do you have if every leader is covering their ass and hoping to make sure they are above scrutiny? 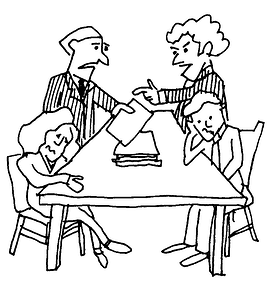 More than ten years ago, at my last job in radio I was a General Sales Manager for a large radio station group.  The General Manager had been in TV prior to becoming a GM in radio and he ruled the meetings we had with an iron fist.   He controlled what was discussed, who was demeaned, belittled and dressed down [Always one if not two of the executive team].  He always found someone to blame and offer why he was the superman that was saving the day.  No one dared argue with his leadership.  The meetings were a dictatorship and always extremely boring.

As you can imagine the contributions from the team were few.  Everything that was initiated came from him.  There was little enthusiasm, passion or excitement present. Most of the leadership in that meeting, eventually left, either to find something where they could contribute and offer their passion, or were fired because they disagreed and were too independent for his leadership style.  Consequently there was no growth. Eventually he left too when his methods for cutting costs and people could no longer provide the margin for profit that the radio group demanded.  He was clearly a diminisher.

Is there value in conflict? The following is a list of values in conflict from the stress doc.  I found his ideas fruitful and relevant to the subject of meetings and leadership;

Conflict! It's a high octane energy source that fuels purpose, passion and the sharing of power. Yet, it's a volatile mix that ignites the invasion of someone's space, blows up hope for saving face, and burns people who forget their place.

Just what is interpersonal conflict? It's the friction that builds when two or more people clash over facts, short-term goals, enduring values and the status of their relationship. It's also the struggle over resources and methods for defining and achieving these contested facts, goals, values and status positions.

Actually, if you're spinning wheels you may uncover the hidden fortune in conflict:

"S" stands for status quo. With conflict you cannot do business as usual.

"U"" is for the underlying feelings that finally come out with a good fight.

"C" means clarification. Constructive conflict compels people to be clear and to take a stand.

"C" stimulates creative synthesis. Opposition may not equal obstruction; it can turn on an expanded and integrated solution.

"E" allows for empathy. You finally understand and feel where your partner in conflict is coming from.

"S" is spontaneity. Healthy conflict propels us to risk a range of emotions, especially anger. And finally,

"S" signifies the strengthened relationship that is the outcome of this challenging process.

S-U-C-C-E-S-S. By harnessing the energy in conflict, you've discovered a secret for success!

Consider these hidden values to conflict when you conduct your next executive meeting.   Do your meetings need a charge of conflict to help your business get on the path to growth and achievement?