You’re interviewing a candidate for a sales position.  You like their responses to your questions, so you ask a typical question often required of sales candidates, “Sell me something!”

In this case it's a jug of water on your desk.

The candidate looks around the room for a moment, and before getting up asks for a match.  You just happen to have one.  The candidate gets up goes over to a basket filled to overflowing with paper from discarded computer reports.  The candidate brings this basket to your desk, lights it with the match, dropping it into the basket.  Soon flames are shooting up threatening to become out of control.

The candidate asks, “Would you like to buy this jug of water?”

Steve Martin is co-author of 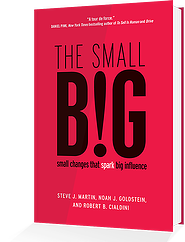 The Small Big along with Noah Goldstein and Power of Influence writer Robert Cialdini, the latter who’s spoken at our Growth Summits previously.  The point of the The Small Big is to expose what the smallest change you can make to your approach that would best increase your chances of success.

His question to our audience dispersed between numerous examples what’s the smallest change you can make that leads to the biggest change in outcome?

In order to succeed in this concept Martin shared three fundamental motivations we must understand about how people make decisions.  People are motivated:

Continuing with this idea of seeing yourself in a positive light Martin noted that asking someone to tell the truth at the front end of an agreement dramatically improves commitment and follow through.  When do they ask you in a courtroom to, “tell the truth, nothing but the truth, so help you God?”   If you want to have someone fulfill the agreement have the signature at the beginning of the form.

He recommends each of us in our business and industry become familiar with the science of persuasion and then invest in it.

There’s much more to share next blog from the Growth Summit.