You’ve experienced it.  The person driving in front, beside you, way ahead or behind is driving erratically.  Maybe they’re driving too fast, encroaching in your lane, or just plodding along and then making adjustments that disrupt others around them.

You know the reason.

And it’s not alcohol related.

When you pull up next to them you discover they’re talking on the phone. Usually it’s with one hand on the wheel, or if they have a hands-free phone you might see them talking (sometimes yelling) at their dashboard.  It’s too common.  According to the National Highway Transportation Safety Administration, at any given moment 8 percent of people on the road are talking on a cell phone.  My sincere belief is that number is low, much too low. 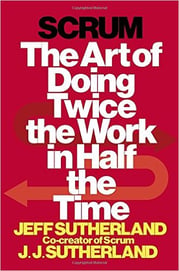 We’ve already discussed the topic of Multitasking from The ONE Thing: The Surprisingly Simple Truth Behind Extraordinary Results by Gary Keller, Jay Papasan in The Big Lie - Multitasking.  While reading Scrum: The Art of Doing Twice the Work in Half the Time by Jeff Sutherland, Chapter entitled Waste, the stories and statistics he provided just added more emphasis to why multitasking is a lie.

Here is the additional insight on Multitasking from Scrum.

Let’s suppose you’re one of the people who believe, Doug I’m not like others.  I can talk and drive my car at the same time.

Sutherland in Scrum offers this, “I can read your mind right now. You’re thinking, Well, other people can’t do it. But me, I’m a high-powered executive” or “I’m smart. I can do it; they can’t.” The literature is pretty clear on the topic, though: if you think you’re good at it, you’re actually worse than everyone else. The University of Utah, which has done a lot of interesting research in this area, asked people whether they thought they were good at multitasking activities such as using a cell phone while driving, and then they tested them to see if they were right.”

The researchers’ conclusions: Perceptions of the ability to multi-task were found to be badly inflated; in fact, the majority of participants judged themselves to be above average in the ability to multi-task. These estimations had little grounding in reality. Thus, it appears that the people who are most likely to multi-task and most apt to use a cell phone while driving are those with the most inflated views of their abilities.

I probably shouldn’t say “they.” I should say “we.” We all do it. It’s hard not to. The key thing to remember is that it’s stupid….. It shows just how painful multitasking is to your brain, and how much it slows you down even when you think it speeds you up. It demonstrates just how wasteful it is.

The research on driving and talking on a cell phone is very clear.

People who drive while talking on cell phones—even the hands-free variety—get into more accidents than people who don’t. The problem is especially alarming when you consider that, even when participants direct their gaze at objects in the driving environment, they often fail to “see” them when they are talking on a cell phone because attention has been directed away from the external environment and toward an internal, cognitive context associated with the phone conversation.

That’s right, people will actually look at an object, the car they’re about to rear-end, or the tree they’re about to wrap their car around, and not see it. And yet, we persist in driving and talking on the phone.

The lead author of the study, David Sanbonmatsu, told the NPR blog Shots in January of 2013, “People don’t multitask because they’re good at it. They do it because they are more distracted. They have trouble inhibiting the impulse to do another activity.” In other words, the people who multitask the most just can’t focus. They can’t help themselves.

A study done at the University of London back in 20057 (a very small non-peer-reviewed study) measured just how stupid multitasking can make you. Psychiatrist Glenn Wilson took four men and four women and tested their IQ under quiet conditions and distracting conditions (phones ringing, e-mail arriving). During the tests he measured the subjects’ skin conductance, heart rate, and blood pressure.  The results showed the mean IQ scores of the subjects dropped by more than ten points when in distracting environments.

Here’s something women reading this blog will enjoy.  The drop-off was worse for men than women. Scrum author Jeff Sutherland offers “Perhaps, for some reason, women are more habituated to distraction.”

Increased multitasking is used to suggest how much you can get done.  We want to be that guy—the Super-Juggler. We tell ourselves we can. Unfortunately, we can’t. And the more we think we can, the worse we actually are at it.

Sutherland points to the incredible amount of research done on software projects. This research is because people kept wasting hundreds of millions of dollars every year, and their products just got worse. Engineers started looking at the data and measuring everything. 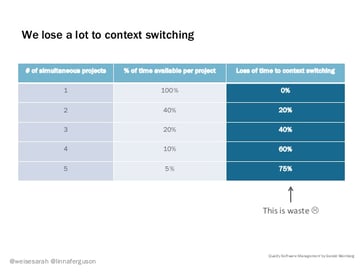 Take a view of great chart that appears in one of the classic works on how to develop computer software, Quality Software Management by Gerald Weinberg:

The “Loss to Context Switching” column is pure waste. That’s right: if you have five projects, a full 75 percent of your work goes nowhere—three-quarters of your day is flushed down the toilet. It’s why you couldn’t write the rows and columns at the same speed. It’s a result of the physical limitations of your brain.

A scientist Harold Pashler demonstrated this in the early 1990s. He called it “Dual Task Interference.” He conducted a few simple experiments. One group would do one really simple thing; press a button if a light went on. Another group would do the same task plus another simple one, like pressing a different button depending on the color of the flashing light.

As soon as another task was added, no matter how simple, the time involved doubled!

If you’re working with something complicated—for example, writing a report, creating a presentation, developing a piece of software, or crafting a book, you’re holding an incredibly complex object in your mind. You must take into account dozens of factors; remember what you’ve done, where you want to go, and what the impediments might be.

All this is consistent with the book The Power of Full Engagement.  We’re interrupted every 11 minutes.  It requires 25 minutes to get up to speed on anything.

That’s a pretty tricky thing to do. And what happens if you’re interrupted or have to switch quickly to another project, even just for a moment? You guessed it: that carefully built mental architecture collapses. It can take hours of work just to get back to the same state of awareness. That’s the cost. So minimize that waste by trying to do all at once those tasks that require a specific kind of concentration. Put those tasks into blocks of time where it’s possible to shut off your phone and put up a “Do not disturb!” sign. 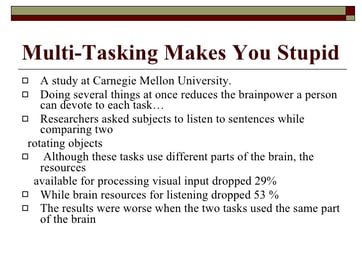 Doing more than one thing at a time makes you slower and worse at both tasks. Don’t do it. If you think this doesn’t apply to you, you’re wrong—it does.

Scrum: The Art of Doing Twice the Work in Half the Time by Jeff Sutherland is an exceptional book.  So much so I hope to follow the pattern that I’ve started with The One Thing and explore it chapter by chapter.  Sutherland finishes each chapter with Takeaways similar to Keller’s BIG IDEAS at the end of each One Thing chapter.

First we return to The ONE Thing: The Surprisingly Simple Truth Behind Extraordinary Results by Gary Keller, Jay Papasan and the three commitments time blocking requires.  That’s next blog.