Changing the Role of Manager

One of the highlights of attending the Growth Summit for me as a coach is the day or two before the Summit when almost 200 Gazelles coaches meet to learn practices and sharpen our crafts. Monday we received a personal audience with Verne Harnish, the author of Scaling Up and Mastering the Rockefeller Habits.

Verne mentioned a May 21st article To Help Kids Thrive, Coach Their Parents by PAUL TOUGH. The article refers to a study started in 1986 in Kingston, Jamaica, by a team of researchers from the University of the West Indies.  In a few of that countries poorest neighborhoods, researchers divided families of 129 infants and toddlers into three groups:

The interventions themselves ended after two years, but the researchers followed the children ever since.

The intervention making the big difference in the children’s lives?

It wasn’t added nutrition. Instead it was the encouragement to the parents to play.

The children whose parents were counseled to play more with them did better, throughout childhood, on tests of I.Q., aggressive behavior and self-control. Today, as adults, they earn an average of 25 percent more per year than the subjects whose parents didn’t receive home visits.

The Jamaica experiment helps make the case that if we want to improve children’s opportunities for success, one of the most powerful potential levers for change is not the children themselves, but rather the attitudes, beliefs and behaviors of the adults who surround them.

Verne referred to another article on Google managers published by HBR. 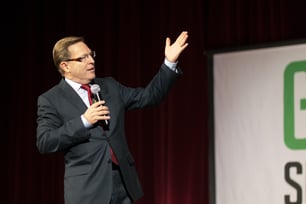 The article supports the same conclusion this children’s study does.  Employees at Google perform better with their managers acting in the role of coach.  In fact investing one hour a week with your direct reports as we shared in The #1 Key to Successful Managing - Google’s Management Study is the key to be considered an effective, successful manager in employee’s minds.

A coach from our group of Gazelles coaches questioned Verne on the coaching designation, asking don’t you really need both a manager and a coach?

Verne’s feeling is that no one needs to be managed in the 21st century.  He urged us to consider eliminating the term manager all together and replacing it with coach.  Verne doesn’t see it as so much a change in role as a change in your mindset.

Today we don’t need to manage so much.  Most of us have cell phones that can manage our appointments, our alarm clocks and even serve as our medical resource.

What’s the first thing you do when you feel ill today?  Before calling a doctor don’t you Google our symptoms?

Verne shared a story of a friend of his whose daughter attended Stanford.  She wasn’t feeling well so she checked into the Stanford University Hospital.  Twice they checked her out and sent her home.  Finally she called her father in Barcelona, Spain.  He Googled her symptoms.  When she went back to the hospital this time, he got the doctor on the phone and told him he believed her daughter had meningitis. Finally they did a spinal on her, and found out she had meningitis.  His daughter lapsed into a coma, and finally after a month came out of it.  Had her father not discovered and matched her symptoms on Google, and then convinced the doctor, she most likely would have died.

The Growth Summit started today and the first two speakers spoke on topics central to the many blogs I wrote on Scrum including, Change or Die, Teams or Individuals – Scrum Lessons, Scrum - When Size Matters.

Verne shared on of Jeffrey Immelt, GE’s CEO quotes from his commencement speech at Siena College, “Learn and drive change. To succeed in a world that is continuously changing you must be able — and willing to adapt. But you cannot adapt without a constant hunger to learn.”

Change or Die isn’t just a theme it is the only way General Stanley McChrystal, author of Team of Teams, Commander of JSOC from 2003 to 2008, where he was credited with the death of Abu Musab al-Zarqawi, leader of Al-Qaeda in Iraq.  McChrystal shared his experiences with us on how his team had to change to beat the Iraq terror threat.  It involved smaller teams, 90 minute daily huddles, and decentralizing authority.  We’ll discover how and what McChrystal did to change the US Military into an agile fighting machine next blog.