This past weekend I attended my oldest sons wedding in Fredericksburg, Virginia. While there several of us attending the wedding including my son Daniel took the time to visit several battlefields from the Civil War. That area of Virginia as several important battles from that era that had a major impact on the outcome of the war, and most of them are within a relatively short distance of each other. Learning the history of several of these battles it became more aware to me that history does repeat itself if only we take the time to listen and examine the outcomes. Forgive me if you’re not a history buff like I am as I unravel the lesson I learned from the Battle of Fredericksburg. 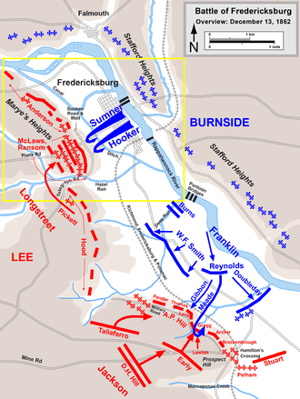 In November of 1862, General Burnside, Union Commander of the Army of the Potomac, approached the Rappahannock River at Fredericksburg with the intention of moving his 114,000 man army across it to invade Virginia and beat General Lee to Richmond. Burnside’s plan had worked in that on November 17th, when he first arrived, the city of Fredericksburg was largely undefended. However the pontoon boats Burnside had ordered to build a bridge across the Rappahannock River were delayed for over a week. [Rebels had destroyed the bridges crossing the Rappahannock River upon hearing Burnside’s approaching army.] By the time the pontoons arrived a portion of Lee’s army also had arrived in Fredericksburg, making the Union Army’s strategy more tenuous but still salvageable. Still Burnside delayed. It took Burnside until December 11, nearly four weeks since he had arrived,  to finally decide to construct his pontoon bridges and then under a ferocious hail of fire from Confederate snipers now defending the city that was now almost completely abandoned by the townsfolk. When Burnside finally crossed the river he attacked, and despite an enormous advantage in men [114,000 Union versus 72,500 Confederates] he was turned back due to the superior defenses the heights above the city offered and a failure to follow the strategy he had set before his generals.

The failure of Burnside at Fredericksburg cost him his job. Shortly after his defeat Lincoln relieved him of his command.

The lesson we can learn for our businesses is that a great strategy, a terrific Brand Promise can be stunted by the failure of our operations to meet the intended promise. Just as Burnside could have easily taken Fredericksburg if his pontoon boats had arrived on time, we can promise our customers to deliver our product exactly on time, exactly as promised and fail to deliver the goods when operations can’t meet the deadline or fails to produce the quality expected.

One of our Gazelles clients is Rackspace, a leader in managed hosting of websites. Their Brand Promise is fanatical customer support and they back that up with three measurable brand promises that they quantify. They promise to have customers back on line after any breakdown or failure within one hour [Internally they want this to be just 5 minutes – remember it’s fanatical!]. Rackspace promises that you will always speak to a human being when you call in. [Their research showed that customers wanted a “live” person to speak to.] Finally they promise that you will not be transferred more than one time. [Again customer research indicated customers hated being transferred to another support person for their solution.]

For Rackspace their Brand Promise is working as shown by their phenomenal growth. Yet recently at one of our public workshops a client on the west coast indicated when we provided this information on Rackspace that their experience had not matched up with this fanatical customer support. They were dubious of Rackspace’s commitment to their promises, because their own experience had proven otherwise.

The point here is that no matter how big you get executing your Brand Promise takes unbridled discipline. You must be tenacious in your efforts to maintain your promise and monitor it religiously.

Discovering your Brand Promise is not an easy undertaking. Yet maintaining its integrity will only occur with the right systems in place that measure its performance as an every day event. Your Brand Promise is part of your overall strategy.  Failure to execute can produce the same kind of disappointment that General Burnside experienced at his “Waterloo” in Fredericksburg.

My second visit to a battlefield was Chancellorsville. I discovered two lessons in that battle that I’ll reveal in my next blog on executing your strategy and communication.