Question:  I can’t get my people to follow the systems I’ve designed.  I think they are just plain lazy.  How can I tell whether or not they’re lazy or if there’s something wrong with the system I’m asking them to follow?

Answer: As an E-Myth coach we learned the first place to look is your system.  The book Switch by Dan and Pat Heath reinforced this with an emphasis on what looks like a people problem is often a situation problem.  It’s a new take on an old E-Myth coaching philosophy that every frustration is due to the lack of a system.

Further evidence of this paradigm lies in the research Switch provides on how test subjects wear out when they are required to use high levels of discipline.  Self-control they discovered is an exhaustible resource.  The longer they use their discipline the less likely they are to be able to respond when they are in a stressful situation.

Ask yourself the following questions:

If you’ve changed a system after your people have been accustomed to performing it a certain way you will find it takes time to establish new patterns.  Getting upset or placing further consequences probably will increase the pattern you are seeing and confirm your suspicion that they are simply lazy.  Instead they are exhausted.

The bigger the change you’ve suggested the more it saps their self-control.  When you change things you are tinkering with behaviors that have become automatic, and changing those behaviors requires supervision by what Switch describes as the “Rider.”

When your people exhaust their self-control they’re exhausting the mental muscles needed to think creatively, to focus to inhibit impulses and persist due to frustration or failure.

Looking for the bright spots [Switch] or conducting Appreciative Inquiry may be difficult to do especially when you’ve invested a lot of time and energy to improve a system.  However it can help build your teams confidence and give them the support they need to carry on and overcome the exhaustion that is preventing them from achieving success.

Here are the steps Dan and Chip Heath describe to Shape the Rider in their book Switch: 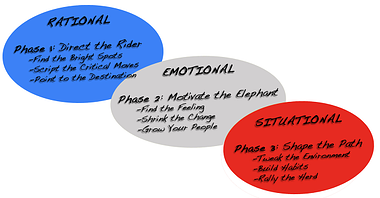 FOLLOW THE BRIGHT SPOTS. Investigate what’s working and clone it.

POINT TO THE DESTINATION. Change is easier when you know where you’re going and why it’s worth it.

It could be you’ve also been using negative reinforcement to direct your employees versus positive reinforcement.  If so you need to review your practices and consider the difference between how you manage.   A good look into this is provided in my blog Positive and Negative Reinforcement – Oops [From Aubrey Daniels book Bringing out the Best in People.]

Effective leaders are able to recognize human nature.  It is easy to blame your people.  They may be the culprit. You can exhaust a great deal of energy and spend a great deal of money chasing symptom.  Focus first on the situation or system.  Make sure you’ve gotten to the core of your issue before you begin changing people.