“It’s simple, you either have discipline or you don’t.”  Captain Shepherd [Kenneth More), from Sink the Bismarck (1960)

As a naval history buff “Sink the Bismarck” is one of my favorite movies. 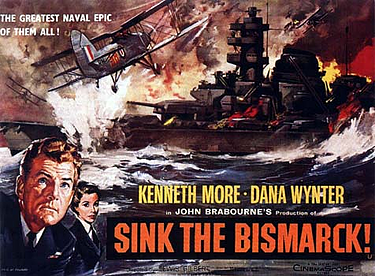 I never realized the powerful underlying tone of this observation than when I’ve worked with my business clients over the past several years. Taking on the serious consequences of Acute Myeloid Leukemia and Bone Marrow Transplant in the last year expanded my deep respect for the power of discipline.

I remind you of its impact with these two quotes:

As Jim Collins offers in Good to Great, “Greatness is not a function of circumstance. Greatness, it turns out, is largely a matter of conscious choice, and discipline”

My last three newsletters spotlighted client’s who succeeded using Strategic Discipline for their quarterly priorities.  This newsletter chronicles a failure stemming from the inability to recognize the absolute critical nature of building discipline effectively.

This client stands out as businesses who failed to realize the impact the absence of discipline can have on your businesses’ ability to succeed. I learned a valuable lesson in my first management position as a radio station sales manager which I wrote about in An Index Card – Execution Discipline.  I’m afraid had I learned it better I’d have been more of a proponent of Discipline sooner.

Many managers and leaders upon arriving at this new level of authority fail to recognize the need to achieve accountability.  Raising children is a similar proposition.  Where do we extend discipline and accountability and where do we not?  What levels of freedom and flexibility are important and where is discipline an absolute requirement?

An opportunity arose several years ago to work with a Publisher in California.   They committed to do the Impact Two Day Rockefeller Habits Workshop.  I’ve since learned and decided not to offer the Two Day Workshop without a corresponding coaching process to help implement the necessary routines for meeting rhythms, but at this time I did not have that policy.

The team assembled was a diverse collection of participants.  Most of the team worked off-site through their home offices.  Particularly one editor had a number of people reporting to him that made interruptions during his day a constant nightmare.  When we got together he had already started the discipline of meeting rhythms with his staff and was reporting remarkable progress.  By getting everyone together each week at the same time he was avoiding constant calls and acquiring the questions and data to share with everyone at the same time. He felt he’s made enormous progress in his productivity and time management simply by having a weekly meeting with all his editorial contributors.

In addition the leadership group included a Technology Office, VP Sales & Marketing, VP’s of New Media and Business Development, CEO, Editor and the Director of Training, plus the Publisher and Chairman.  The Publisher & Chairman was hopeful this event would launch his CEO into more of an ownership role of commanding the company allowing himself to reduce his role in the company.

Two developments occurred that prevented this workshop from being an all-encompassing success.  Due to my poor planning we didn’t dedicate enough time to actually defining the One Thing to the comprehensive level we should have.   The discussion on what the top priorities were for the company took a long time, and finally the lack of leadership from the company in making a decision on what their ONE THING should be never truly emerged.

The group, primarily the in-house leadership focused on Revitalize/Protect current staff to be the One Thing.   The team discontent swung the decision.  I believe the CEO was swayed by their emotion and the Publisher/Chairman wishing to give the CEO the decision making ability did not step in to push what might have been a better approach.  The challenge became how to determine what that means and how to measure whether or not this is being achieved. The group has been without pay raises for more than a year, yet stands to share in a nice profit sharing bonus as long as present conditions continue to prevail. The staff has been working long hours without taking vacations.  It would have been a good balancing priority or critical number to have for the Annual Plan, however based on their multiple priorities established I didn’t feel right as a ONE THING.

A lack of respect for the importance of discipline, accountability, and trust within the leadership group led to the other disappointment.

During the Rockefeller Habits Checklist exercise several managers protested that completing it didn’t make sense since these were rules from the Rockefeller Habits and were not currently being followed by the company. While the VP of content had started daily huddles and reported good success, reducing the number of emails he received and his time commitment to managing, there was resistance from this group to fully engage in meeting rhythms.

Strong leadership is required to ensure the meeting rhythms are established first at the executive level and then down to the managerial level. Communicating priorities, reviewing metrics and developing better decision making through pattern recognition are only established and expanded through the discipline of daily weekly, monthly, and quarterly meeting rhythms.

It is critical that leadership (CEO) monitors this progress and demands his managers follow the meeting rhythm discipline. In this case it might have been wise to reduce the executive team meeting group to 4-5 people to have the strongest and most impactful managers exercising decisions and to also shorten these meetings.

Looking back on this experience I failed to properly provide enough time to make sure the ONE THING was determined.  It was one of my first Rockefeller Habits Workshops and the lack of leadership to make an effective decision and my failure to make sure we had adequate time dedicated to hammer this out meant this ultimate focus was not achieved.  It makes sense to have commitment from the group to work until you absolutely have no doubt what your ONE THING is specified and how you will measure whether or not you will achieve it.

The lack of trust in the leadership group, their fierce independence and desire to remain in their personal silos and not see how this was impeding the growth of the organization ultimately led to this not being defined for fear it would restrict them too much.

My choice would have been to establish the meeting rhythm process as essential in the first quarter for Strategic Discipline.  In 90 days they would have clearly seen the impact that the meeting rhythms, priority focus and monitoring metrics would achieve for their business.

They may have succeeded despite this.  As I indicated they elected not to continue the coaching engagement with me.  They were disappointed in the outcome, as was I.

A lesson you can learn from and which I did.  Without a commitment to the discipline of meeting rhythms, Annual and Quarterly Planning will fail to create enough juice and momentum for your business.

You absolutely need a stake in the ground as to what is the One Priority for your quarter and year.  You need to measure this and monitor it through meetings.  When a group cannot make a decision on what is most important someone, (CEO or Owner) needs to step up and chose!

Decision making is critical.  Someone has to have the courage and backbone to stick their neck out even if the rest of the group can’t decide or chooses something that is not in the best interest of the long term growth of the business.

With my health improving however limiting my ability to meet clients at their location for the next several months I’ve developed a special Strategic Discipline Momentum Builder for 2013 that you can purchase and implement through GoToMeeting with Positioning Systems.  It’s intended to offer you 90 days of impact and the necessary discipline to start, maintain, and stay on course with the routine of building growth and these essential habits in your business.

Ask for details in the section below.

I sincerely hope I’ve outlined for you the impact and critical nature of discipline in building your business.  I’m developing a Good to Great People Discipline Checklist which I hope to share with you in a coming blog.  It’s intended to make you aware of the critical elements that drive the People Decision in your business, similar to the Rockefeller Habits Checklist where the focus is on Execution.

Do not deceive yourself that your business can be successful without discipline.  Make a decision now to work on developing your team and your business through exercising the business’s muscle that fuels growth: Discipline.