Recent evolutions in my life have focused my attention on the people I wish to spend time with.  In the last year I spent in radio a call from a representative of Jacques Werth’s High Probability Selling sparked my attention.  His system promised significant help with making phone contact with prospects, specifically cold calling.  His methods were good; however the greatest value I received from his process occurred in the conversion process.  There were specific prospects he recommended that you wanted to avoid at all costs.  They were the reason for major challenges in customer service.   These are prospects who have unresolved conflict. 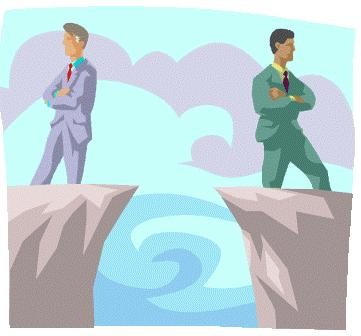 His methods may be controversial and difficult to achieve in every business.  Despite this there is still reason today to be able to identify prospects who have unresolved conflicts that can make your customer service department miserable. Here are some insights into High Probability Selling’s methods and why it’s critical to avoid conflicted prospects:

People who have unresolved conflicts are the source of most if not all of your challenges in customer service.  I’m speaking to you about customers who are impossible to resolve issues with, not situations where you’ve made the mistake and need to correct an issue.

Perhaps you’ve found customers who have issues that no one else has, or simply refuse to resolve things and constantly bring up new issues after previous ones have been resolved.  They are “the customer from Hell!”

Jacques Werth’s (High Probability Selling) principle for a process called Trust and Respect, allow you to identify how these customers are before you start doing business with them.  It protects you from beginning to do business with them simply by recognizing the potential they have for wreaking havoc in your business.

Trust and Respect is a regression questioning process used by psychiatrists with patients to help them identify their issues and then begin to work on them to resolve them.

Anyone who is good at selling, asking questions can, simply by probing and showing interest in their prospect discover whether or not the person in question has unresolved conflicts.

Perhaps the biggest obstacle to overcome is knowing where you are going with the questions and the result you wish to achieve without being completely straightforward with your prospect.  As noted in the download: Attempting to conceal your personal agenda. If your personal agenda is anything except determining whether or not you trust and respect the prospect, the process will not work.  On the surface the questions appear to be relationship building, yet deeper and more personal than most salespeople would ask in building rapport with their prospect.

In my experience I’ve rarely found anyone who has had difficulty with the questions.  One reason is that people are so infrequently asked these questions. When asked sincerely and with a deep interest in the person you are speaking to, few object.  Indeed in most cases where someone does object, I’ve had one person ask, “What’s this have to do with the coaching process?” it may be the first sign that they prefer not to answer these questions simply because they have something they wish not to reveal.

While the questions dig deep and ask for insight into the prospect’s lives, the bonus is once you’ve completed the questions and discovered whether the person has an unresolved conflict (most don’t), you have gained a deeper sense of rapport and trust in your relationship than anyone who is competing for the business with you could achieve.

Relationship building is a prime component in getting the sale.  By following this process you’ve immediately built a better relationship than your competition will be able to achieve unless they follow the same process.

Finally if you discover they have an unresolved conflict you can simply bow out of the sales process offering that you don’t feel their business would be a good match for yours.

Some questions in the process might be:  Where did you go to school?  Tell me how you decided to go there?  Who first noticed you were good at that?

Once you begin down the path of regression, getting the prospect to open up about things in their history, you slowly move them back in time until you get to pre adolescence.   At that point you ask questions about their relationships.  What was it like growing up in your family?  How did you get along with your brothers, sisters, your parents?   Give me an example of a conflict you might have had with your brother or sister, your parents.  How did it get resolved?  Who was the disciplinarian in your family?   Give me an example when you were younger what you might have been disciplined for?

Discovering a conflict and how it worked through you may find that this person is still bitter or holds a grudge against the person they had the conflict with.  That’s your indication that they have an unresolved conflict.

At times you may find that they have unresolved conflicts with a brother, sister or parent, yet they realize it and have done all they can to resolve it and then simply accepted the situation as unresolvable and choose to avoid that person in their lives.

When Jacques regressed me I recall offering a story of when I was preschool age and it was my turn to do the laundry with my mom.  I’d been able to get out of it being my turn, until my mom remembered my brother had done it last time.  Evidently this upset me very much because at a break in my cleaning my brother and my dirty clothes I went outside, approached my brother and told him mom had given me permission to slap him. When it was discovered what I did I was strapped pretty good.

The lesson for me was strong never to hit anyone.  My brother and I were close, just a year and nine months apart.  We had many conflicts growing up, however he was particularly forgiving and forgetting.  We might have fights playing basketball or football, and five minutes later it was like nothing had happened.  We were best friends and wanted and needed each other to play with.

Jacques shared his story about an unresolved conflict.  A friend of his asked him to have dinner with a group of brothers who he was considering buying their scrap metal business.  Jacques used his trust and respect questions to ask the brothers about their history.   They revealed they’d worked for their father in his scrap metal business, always being promised that they would receive a share of the business when it achieved a certain level of profit.  Year after year it failed to do so.  They revealed how the scrap metal business was particularly cutthroat and it required doing several things dishonestly, including making the scale lighter when scrap metal came in, and heavier when it went out so that they could increase their prices and make a profit.  After many years working with their father the brothers discovered he’d been cheating them all along and the business had actually achieved profit standards but their father had lied to them about it.  That’s when they decided to start their own business.  Suddenly during the sharing one of the brothers said, “I know why you’re asking all these questions!”

The meeting quickly ended, and upon escaping out of the restaurant, Jacques friend offered “I’m so glad I brought you with me.  I can’t believe I ever wanted to do business with those people.  I’m happy to have avoided that!”

People with unresolved conflicts are impossible to please.  They are constantly using you, and anyone else they encounter to attempt to resolve a conflict they had in their childhood that remains unresolved.  They haven’t resolved it with them, and they are attempting to find resolution by being right with you.

You cannot win that argument, because even if you gain resolution, they’ve not resolved their previous issues and they’ll be back again with a new issue to get you to prove them again right.

We make enough mistakes in our businesses of our own accountability that require us to take steps to justifiably resolve them with customers.   Choose who you wish to work with and you can avoid a lot of conflicts that should never be your battles to begin with.  Accept only those issues you are responsible for and you’ll have a much more peaceful and enjoyable business to run.