Question:  When choosing a business coach, what would you suggest are the most important characteristics to look for?

Answer:   There are a number of answers to this question from authorities and sources if you Google this question on the web.  Please allow me to share a story with you to offer what I feel is your most important consideration.

Imagine that you’re a high school basketball player. You’ve completed your freshman season.  It’s been a disappointing season since you were accustomed to winning.  Your team finished with just 6 wins and 12 losses.  You averaged 8 points a game and are the team’s second leading scorer.  The varsity team at your school failed to win a game, prolonging  a consecutive game losing streak that has now extended past 30 games.  The varsity coach invites players to continue to scrimmage after the season and you’re more than happy to continue playing.  You love basketball and want to improve. 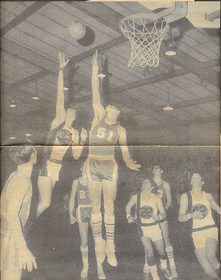 In fact immediately after the last game in your disappointing season you recommitted to a promise you’d made to practice a minimum of an hour each day.

The new coach has a plan for the next season.  He begins to push his agenda immediately.  In these scrimmage sessions each evening after school as you and your teammates practice he preaches, shouts and scolds the team to “Pound the ball inside”  “Get the ball down low”  “Go to the hole”  “Drive when you get it down there!”    He’s adamant that his team will get the ball inside to his 6’4” center.  Each evening over and over he repeats his message.  He’s building his approach around one player, the center. He believes this person has the commitment, dedication and ability to turn the high school program around.

Your sophomore season is worse than the freshman season in terms of wins.  As a starter on the varsity your team wins just two games, but it breaks the better than two year victory drought that the team had slumbered through.  Your point production improves to 16 points a game.  That’s because the center the coach wanted to pound the ball into is you.  The team shows dramatic improvement in your junior season improving to 12 wins and 7 loses.  You lead the team and the entire conference in scoring – 24 points a game.

Your coach leaves after your junior high school season, but his work has set the foundation for a turnaround in the team and your personal fortunes.  As a senior you again average more than 24 points a game and the team wins 16 games and loses only 5.

My high school coach was named Gene Wick.  While his name is the same as mine he was not my father.  My father never played basketball and would have had no interest in the game had not I played it.  Yet this man, Gene Wick, had possibly as much influence on my life as my father did.  Why?  Because he believed in me!

At the core of your decision to choose a coach is that coach’s belief in you.  That means that they must know the powerful influence that someone can have in the life of another.  They must recognize that believing in you and what you are capable of can profoundly influence your ability to achieve your dreams.  The example provided from my own life isn’t an isolated incident of people who have had deep affect on my life.  A sales manager, college teacher, my wife, brother and family members have all impacted my life by their faith and confidence in me.

You would be a rare person to have not been influenced significantly by someone in your lifetime.  The insight here is that if you plan to hire a coach, it is critical that you find someone who will believe in you.

That doesn’t mean that they shouldn’t also remain objective and be able to criticize you, because among the other critical elements I feel are important in coaching are discipline, accountability, assertiveness, asking questions, and experience.

A coach’s bottom line requirement is the ability to keep you accountable for your commitments. They need to ask questions to discover what you know and how you feel.  They are best if they help you discover the answers within you because then you will respond best to your own enlightenment.  In many cases they will help you uncover what you already know, you just forgot it somewhere in the deep recesses of your mind and heart.

The final piece of the puzzle is the last element in our Gazelles 4-3-2-1 formula.  The 1 in the formula is: A coach is a catalyst.  Their work should catapult you to greatness, to achieve your potential.   They must stick with you through thick and thin and believe in you even when you’ve lost faith and find it difficult to do so yourself.  They need to kick your butt and pad your fanny when you need it most.

Having been a sales manager, general manager, owner and sales person, among other titles in my career I know of no other source that can stimulate higher achievement than a mentor, coach, or friend who believes in you and your capabilities.

The ability to look into our souls, to be able to love and believe in us despite the faults that we are all too familiar with, in my personal opinion, is the critical element to selecting a coach who can vault your performance to the pinnacle of achievement.

It is an honor to work with my clients.  It’s become second nature for me to believe in them and what they can achieve.   I sincerely hope that I will have the privilege to work with you someday.  If not, it is my sincerest wish that you discover someone who is capable of help to make your dreams come to fruition.   May you find as I have the best coach in the world.